The Building of a Partnership

Mills & Cockburn consists of 2 individual musicians, Anthony Mills and Andrew Cockburn. The story of our partnership is a story of evolution through playing in a band together to a more satisfying partnership of music creation and recording. Some memorable people crop up along the way. Here is the history as far as we can remember it.

September 1992 - Anthony, at this time unemployed, in boredom picks up an old acoustic guitar and decides to learn to play it. He has written poems in the past, and starts by setting some of these to music. Progress is rapid as he finds a hidden musical talent, and develops it through fanatical practice. His songwriting skills steadily improve in quality with practice. He also discovers that he has a good singing vioce, and takes lessons to improve it.

In October 1992 Ant's friend Steve Wilkinson becomes bored with Ant's obsession with music, and decides to learn Bass Guitar to complement Ant's guitar playing, and form the nucleus of a band. The fledgling band was named "Wonderful Life".
November 1992 - Ant buys a Blade Stratocastor copy, which to for many years influenced the basic rythym guitar sound of the evolving band, with it's distinctive mix of sharp bite with full body. At this time, Ant and Steve met Pat, a freelance record producer who spured them on to greater acheivements and encouraged them to keep going.

By now, Ant's song writing style had developed into a mixture of slow acoustic numbers and some more upbeat rock numbers, all posessed of distinctive non distorted rythym guitar lines.

January 1993 - With thoughts of gigs in mind, now that Ant had written many good songs, a guitarist called Graham and his drum playing brother were recruited. After 2 weeks they left. being mainly interested in rock music, they could not come to terms with the developing Wonderful Life style.

February 1993 - Ant and Steve decided to start recording some of their musc, and bought a Tascam Portastudio, an Alesis drum machine, a Quadraverb GT guitar effects processor and a lexicon reverb unit. Recording now became an important part of song development, a medium to try diffrent ideas. Ant and Steve soon produced a cassette of early songs called "Who's Laughing Now" under the name "Double Vision".

March 1993 - Ant and Steve recruit a rythym guitarist called Niven. The idiea is that Niven will relieve Ant of the job of guitar playing to enable him to concentrate on Singing.

In April 1993- Dave Wright was spotted by Ant and Steve drumming in a Thrash Metal band. He was quickly poached and added to the band. Dave brought some innovative drumming to the songs and for the first time allowed the songs to be played live.

Meanwhile, Andrew had been a keen guitar player since the age of 10, had played extensively at school and been in a school band called "Stories for Boys". With a job in computers Andrew was experimenting with Midi sequencing, bringing to bear his grounding in musical theory learned at school. At a loose end musically after high school he devoted himself to development of his electric guitar playing in a vacuum looking for the right outlet.
November 1993 - Andrew had been a casual aquaintance of Ant and Steve for a while, and when they discovered he could play guitar they invited him up to a practice. He was immediately recruited as lead guitarist, and added his own blend of solos and upbeat funky chords to the mixture.

Andrew also brought his classical music training and theory along with his knowledge of computers to bear, and the band was quickly using Midi to sequence drum tracks and keyboards for recording purposes.

February 1994 - To prepare for upcoming Gigs, the band purchased an 1100W rig with Peavey HiSys 4 speakers, and a Studiomaster Diamon2 16:2 Mixing Desk. Posessed of it's own PA, the band was now ready to gig in earnest.

May 1994 - By now it was clear that Niven was not fitting in very well with the band. He was unable to bring any originality to the sound, and Ant decided he could play rythym guitar better and sing at the same time. Niven was given his marching orders.

January 1995 - Ant influenced strongly by Andrew had started to consolidate a Rock Funk feel to his songs. The band decides to focus on this sound to acheive a recognisable style. The set is reworked, and all songs not fitting into the new style are removed. The band starts to work on their new sound. This is aided by the purchase of Wah Pedals by Ant and Andy.

In March 1995 Bella Bloxham joins the band as a backing singer. Her strong harmonies, coupled with the rock funk focus starts to lend a distinctive and coherent sound to the band's songs.
March 1996 - Demo recorded at The Works Studio in Redditch. Three songs are recorded over 2 days, Little Gun, Vote For Me and Automation.

The demo is sent to many record companies, but no interest ensues.

July 1996 - Ant starts to expand the cramped recording facilities and takes over a garage. There is now a Control room and a Recording room. Ant and Andy together purchase some professional audio equipment to enable high quality recordings to be made. The new facility is named Sun God Studios.

This marks the point at which Mills & Cockburn really came to the fore. From 1996 to 2000 Mills & Cockburn were prolific, writing and producing many songs. The focus moves away from live performances into studio work and is driven entirely by Ant and Andrew, aided by strong vocal performances from Bella. The partnership is renamed Mills & Cockburn to reflect the new focus. Dave moves on to go to college, and Steve whilst remaining on good terms with Ant and Andrew becomes a lot less involved.
During this period, 3 albums are created:


showing increasing sophistication and mastery of the studio equipment as time goes on.

In 1999, the studio is again upgraded with the addition of an Akai Sampler and a Harmonizer to help with backing Vocals.

Sept 2001 - Andrew marries, Ant's time is increasingly taken up with his family, and the writing is on the wall. Less time is available for writing and producing songs.

In this period, occasional get togethers produced some memorable evenings, a few new songs and a couple of recordings, but none of it is really completed to the satisfaction of M&C.

2007 - Andrew visits the UK, the partnership records a number of acoustic songs, their last ever. These sessions form the basis of the remainder of Mills & Cockburn songs that will be released over the coming months and years. 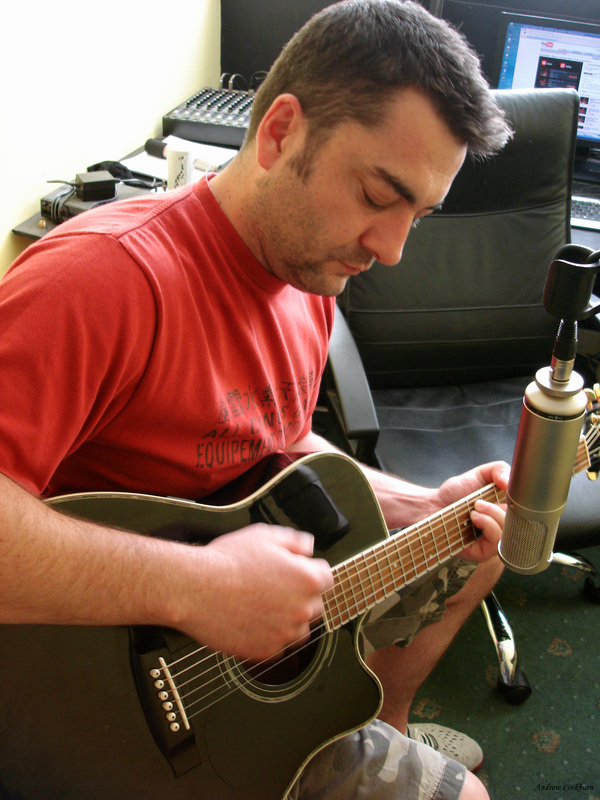 Anthony during our 2007 Jam
That's where the story ends for now - working across 3000 miles was hard, although we continued to try and collaborate. Although we had many songs left to write and record Anthony passed away unexpectedly in September 2013. Andrew will continue to work on the remaining songs to complete the record, but this chapter had now irrevocably closed.

RIP Anthony, I miss you.